I have this feeling of hopelessness, exhaustion, disappointment. Mass shootings, bombs, vitriolic rhetoric, more mass shootings – so very much anger and hate. I feel like the man who some people elected president is a washing machine – agitating, performing a kind of a cleaning function in alterating facts, jumbling, tangling. He is not alone in the lies being told in this campaign – probably in all campaigns. I am more likely more sensitive to it this year. I’m suffering from election overdose. Can we just get over it? Thank you.

All is not bleak, truly. I had a good visit with my Kat last weekend. I talk with my Gep via email or text just often enough to satisfy me. I get angsty if we go too long without contact. Once a mother, always a mother.

I have been ignoring my yardwork, because it’s the season for things to fall from trees. I like the leaves of the deciduous trees – I like the crunch beneath my feet when I walk through them. I am less fond of the needles of the Ponderosa Pine – those long needles that pile up everywhere. And of the cones that fall from those pines. They are pretty, yes. I use some for Christmas decorations. But they are also dangerous, when I don’t see the one my foot is about to come down on which can result in a twisted ankle or fall. Falls are bad.

Instead, I have been spending my time in the kitchen, rearranging, changing things, dehydrating foods to allow more space in my refrigerator freezer. I have a side-by-side, which seemed a good option when we bought it. But it’s hard to see what’s in that freezer without pulling everything out, without getting down into a crouching position. I have opted to quit using the big freezer in the garage because after all there is only one of me, and I have seen a noticeable drop in my electric bill as a result. That was the goal. So I dehydrate vegetables, I make some of my Shasta’s dog food, supplementing her dry kibble with what I hope is a healthier diet. I dehydrate sweet potatoes and bake pumpkin biscuits for her treats, surely healthier than some of the expensive things I’ve been buying in the stores. Oh, yes, and I cook for myself. Because my tastes have changed, and those processed, prepared easy meals that are so readily available in the stores no longer taste good to me. So I cook enough to eat for a few days, then I cook something else for a few days. It works for me. I stay within my property boundaries, recharging, pretending I’m on my own island. My primary contact, out of my choice, with you all.

There is hope – this election will soon be over, and then I will decide whether to hibernate more deeply in my cave, or whether I’m ready to face the world. Does everybody have those times? 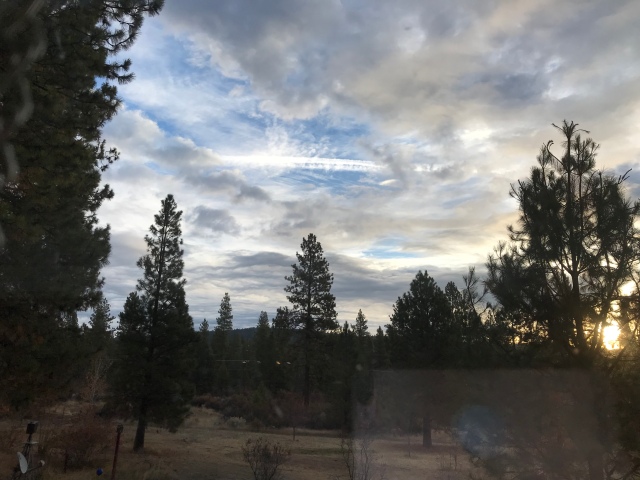