Are we really ready to turn off her lamp? #KeepFamiliesTogether #StatueofLiberty

I believe as Barb Taub does, The Lady must be weeping inside her heart. https://barbtaub.com/2018/07/01/are-we-really-ready-to-turn-off-her-lamp-keepfamiliestogether-statueofliberty/

They’re not keeping “them” out. They’re keeping “us” out.

I wish I could join the millions marching to protest immigration policy in the US. Nobody had to march to admit our family when they were fleeing religious persecution and economic disaster in Ireland. Or in Scotland. Or in Germany. Or in Poland. My grandparents weren’t taken from their parents and put into baby jail.

They knew it would be okay to come to America because the Lady said so. She rose from pennies raised by French and American school children, and she raises a lamp against the darkness. She says welcome. She says that’s who we are. 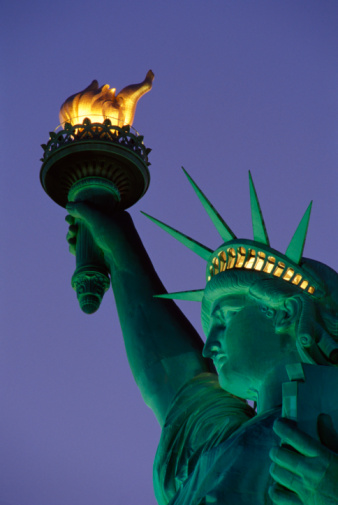 Keep, ancient lands, your storied pomp!” cries she
With silent lips. “Give me your tired, your poor,
Your huddled masses…

2 Responses to Are we really ready to turn off her lamp? #KeepFamiliesTogether #StatueofLiberty