Yesterday afternoon I went outside to do a little – very little – bit of yard work. My focus is the area around the house, where the pine trees litter every fall, and the grasses choose to populate what I want to be flower beds. The grasses are not especially discriminating, and seem to prefer to plant themselves where they are not wanted. They are also stubborn, refusing to give up their grip deep in the soil, so as soon as it warms up a bit more I’m going to mix up a solution of vinegar, epsom salts and dish soap, per a recipe for a weed killer mixture I found, and test it out. In the meantime, I pull what I can, rake out the pine needles, and giggle to myself when I find something I like popping up. Yesterday I found a couple of daylilies I planted last year and forgot about. Love surprises like that!

After I spent as much time as I cared to on my hands and knees, raking, pulling, discovering – and the amount of time I care to spend in the beginning is minimal – my Shasta girl, who spent her time on the deck watching me work, and I decided to wander around the yard to see what we could see. Well, okay, so I decided to wander around the yard and she decided she’d accompany me. She has learned her mom’s lazy habits very well, and is generally quite content to lie down and relax.

The Scilla are showing their pretty faces. These little girls have been so reliable for the 18 years they’ve managed to survive. Apparently my underground critters are not so fond of their little bulbs, unlike the crocus corms that disappear after the first year of bloom. Or the tulips – I used to have at least 100 tulip plants. Now I have two, both of which struggle each year. The underground critters really like crocus and tulips. And lilies. And I could go on, but I won’t. This photo is slightly blurred, because I had not yet discovered the camera feature I tell you about next.

I found the pussy willows in bloom

And – bonus! I discovered my phone camera has different modes, one of which allowed me to get that closeup! I’ve only had this phone for two years, you know – you couldn’t possibly have expected I might have discovered this earlier, oh, like maybe a year and 10 months earlier, could you? It’s the little things in life that give pleasure – it’s also the little things in life that can cause extreme embarrassment. I’ve always suspected I don’t use my electronic gizmos to their full capacity, and every once in awhile something like this happens that reminds me how correct I am. Sigh.

We walked a little further, and found the first of my daffodils greeting the spring sun

This is not the clump that usually blooms first, so it was a wonderful surprise.

Moving on, the Lenten Rose is offering more blooms than it has in the past years, with much smaller leaf clusters than it has in past years. It used to sprout large leaves with a few blooms, so this was another of those happy discoveries.

I have no idea why it’s changed – it’s not like it’s a very young plant. It’s one I planted just after we moved here in the fall of 1999.

Wandering to the back of the house, which faces the front of the yard assuming front is what borders on the road – I know, when we placed the house we did not follow the norm, so it’s just strange trying to decide what is really front and what is back. But I digress – at the back (front?) of the house, in the flower bed there, daffodils are getting ready to start blooming, and the violets are in full bloom – those pretty purple little flowers that always wake up early in the spring. 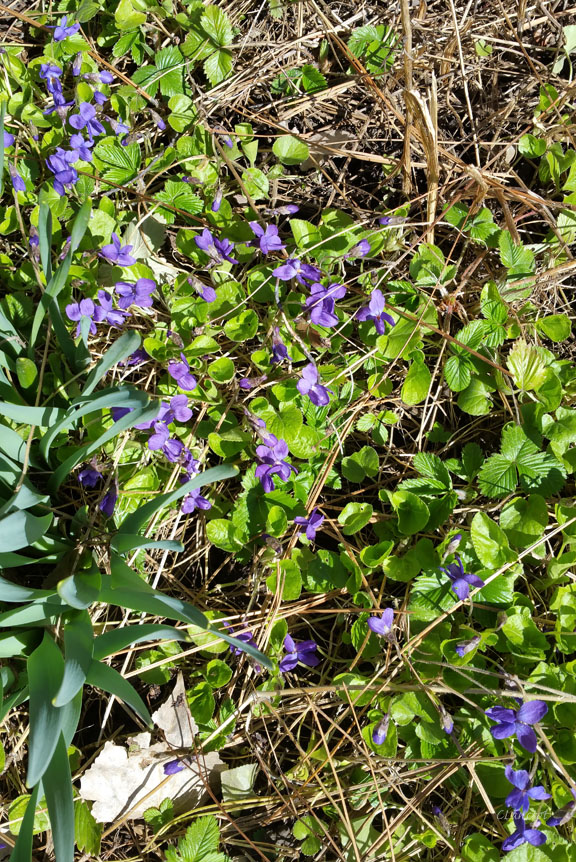 And there you have it – the reasons for my spring happiness! The reassurances that I really do have enough. How about you?