Let’s Fly Away Over the Ocean

In early April of 1992 I had very close friends who were in Warsaw, Poland. He with the Reformed Church of America, she, the pastor’s wife, teaching in an international school. It had been years since I had seen them, and this seemed the perfect reason to fly away, over the ocean.

In those days flying was much different, much easier. There were no limitations on fluids in carry-ons, no charges for baggage, no removing the shoes or body scans in security. People were pleasant. I know, hard to believe now, isn’t it? I flew British Airways and was fortunate to get a seat on the outside row. I was even more fortunate because no one was in the seat next to me, so I had lots of space, and in the two seats facing me was a young man originally from London, now living in New Zealand, on his way back to visit family. The flight was long, but comfortable. 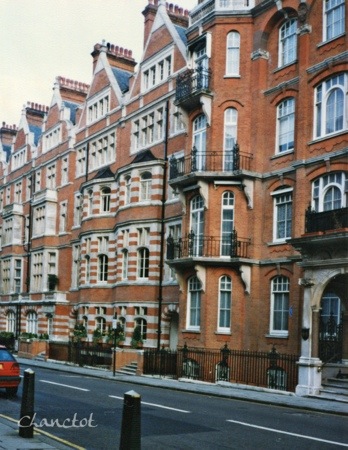 I arrived at Heathrow at 3:05 p.m., and by the time I got through the baggage claim, found a taxi and arrived at my hotel, it was dark. I wandered about the nearby streets for awhile that evening, looking for a place to eat. I had the thought that I would find a traditional English pub, and that is where I would enjoy my dinner. Ahh, but the inner chicken came out, and I ended up at Burger King. Disgusting, isn’t it? I am much braver when I have someone with me – like my daughter in Seoul and my daughter and son in Beijing. Alone, I regret that I tend to take the easy way out. 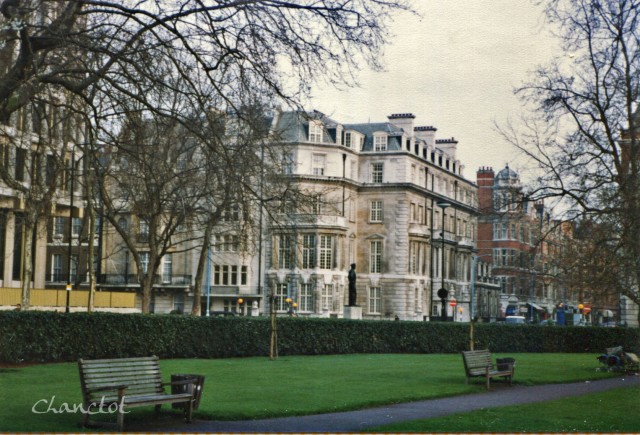 In the early morning, I left my hotel, intent on getting some pictures of something in the couple of hours I had before I had to go back to Heathrow for my flight to Warsaw. What I got was some pictures of some of the residential streets of London. The day was gray, but dry. The streets were very quiet, probably because it was very early in the morning. 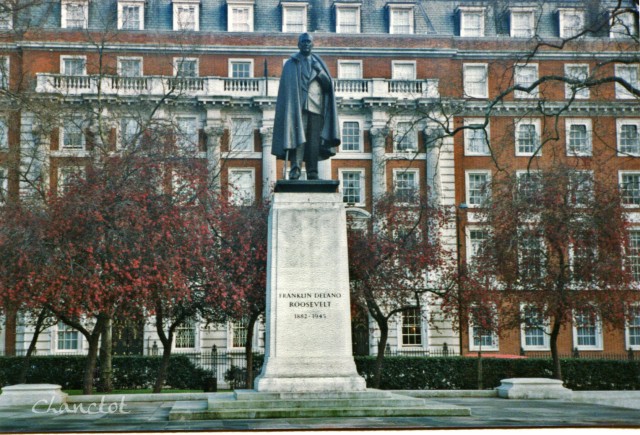 I thought it interesting that in London there was this large statue of Franklin Delano Roosevelt. I can only assume it’s there because he and Churchill worked so closely together during the second world war.

Time then to rush back to the hotel, gather my luggage, capture a taxi and go back to the airport. I loved the taxis in London – they were all black and looked like very old cars, but they were in good repair and clean, with drivers who were very polite. Alas, I took no photo.

Off to Warsaw, in a smaller, less comfortable plane, but with a flight time of under three hours so it wasn’t bad. They were building a new airport, but it was under construction and I was ushered into the old airport. I so wish I had taken a photo – it was so intimidating. Very stern looking, armed men in military uniforms in stalls enclosed in glass in a dismal gray concrete block building. I did get in with no problem, albeit with a quickened heartbeat. My friend picked me up and drove us to their home. The part of Warsaw that we saw on that drive was a legacy of the Russians during their time of control – ugly gray concrete block buildings, the only bright spot being the occasional grassy area. No landscaping, no balconies, a total absence of beauty. Again, I took no pictures. 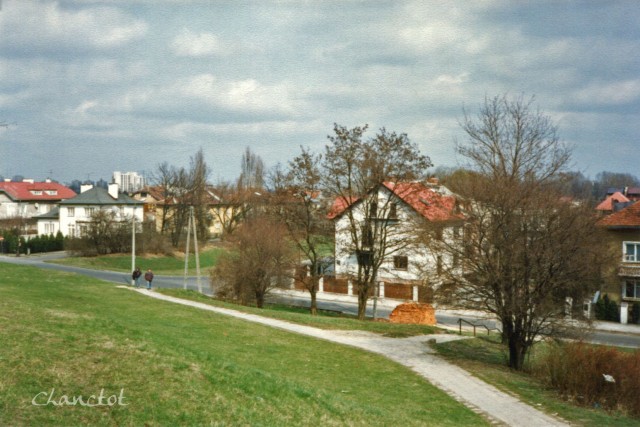 The next day, since they both had to work, I built up my courage and wandered off on my own. I managed to catch a bus just a block or two from their house – after having been given specific instruction on where to find the bus stop – and get into Warsaw, where I took a tour. 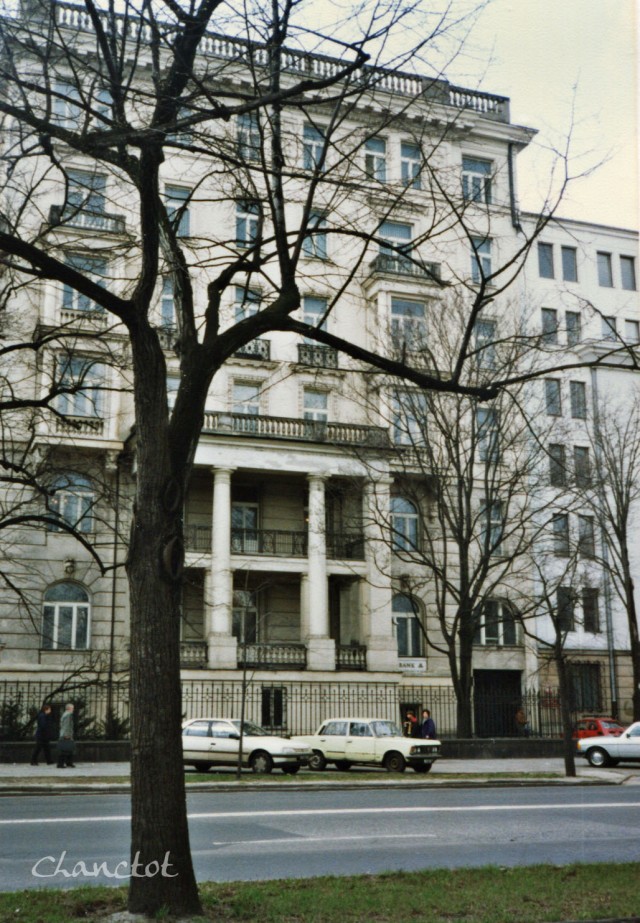 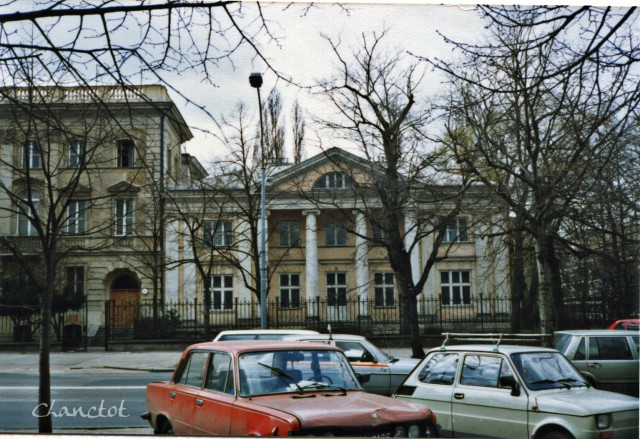 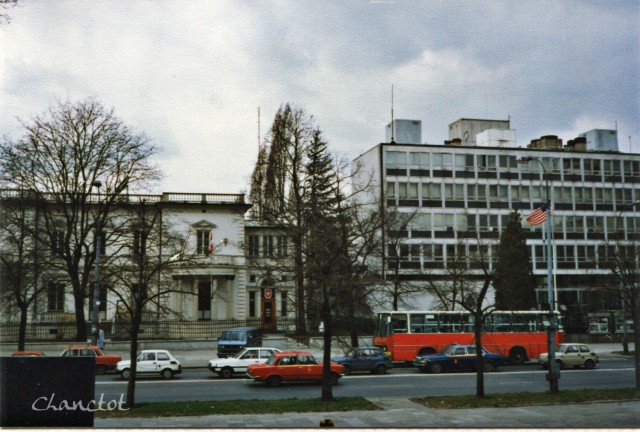 I cannot guarantee that these photos were taken on that tour – they may have been taken on a later day when friend and I ventured into Warsaw. However, this is embassy row – you will note the lovely old buildings in the first two photos – those being embassies from countries other than the US. The ugly, more modern building on the right side of the third photo was the American embassy. Sad, I thought. It stuck out much like a sore thumb.

That’s enough words for this day, and, possibly because this trip was taken during the day of cameras with actual film inside them, not as many photos as I would like. Nowadays, in this digital age, I can guarantee I would have taken many more photos of many more thing. Probably enough to make you want me to share less. We’ll continue the tour on another day.

12 Responses to Let’s Fly Away Over the Ocean