Travels to the Past – part 3

One of the offices on the second floor. The door at the back led to the apartment behind it. When the building was converted to a hotel, the offices were converted to sleeping rooms, I believe, perhaps adjoining rooms. I have found nothing to tell me for certain how that was handled. 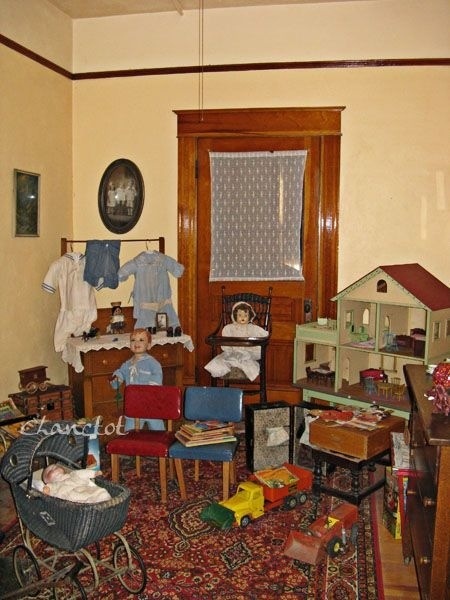 A child’s playroom, containing many of the toys available for children during that period. Before plastic yes, and I’ll bet some of them were painted with lead-based paints. 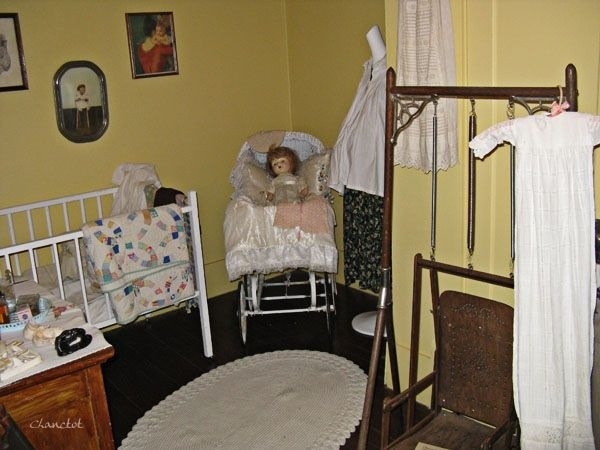 The nursery – note the very long gowns which I assume were Christening gowns. I think it’s interesting that really things have not changed that much. Well, insofar as the basics necessary for children. The cribs, the bouncing chairs – at least that’s what the object to the right in the photo appears to be. Obviously, the materials used now are much different, but the concepts remain the same.

A man’s traveling trunk. No wheels or extending handles here, and it certainly would not qualify as a carry-on.

Ladies’ dresses. Lovely, aren’t they? So feminine. It would be fun, I think, to wear one of these for a special evening – minus the corset, of course – but truly I am a jeans gal and cannot imagine spending one of my regular days in a garment like this. Our lives are much different now, I think. Not to mention that now we get to be regular real people, rather than an ornament to dress a man’s arm.

See the Sprectrascope on the table? A very early version of the Viewmaster. Do they even make Viewmasters anymore? Do you remember having, or at least seeing in your lifetime, a Viewmaster? Now we view our photos on a computer of some type. Or a digital frame, which cycles through a series of photos.

A Seth Thomas clock; the first I’ve ever seen up close and personal.

A man’s smoking table. Back in the day when a woman would have to be an extreme rebel to smoke, and before the evils of smoking, the health risks of smoking, were known. When it was still fashionable for men.

Before Kindle and the Nook – before paperbacks and brightly colored paper jackets, there were these little books, a good size for carrying with you I would think. Vera Moore Jones was the daughter of one of the owners after the hotel was sold by Maud Baldwin.

That’s it for this day. Not really any historical information, but I have a bit left that I decided to save for tomorrow, when I publish the final installment of this visit. I have become quite interested in the Baldwin family, Maud in particular, who I am finding more information about than the other family members, but not as much as I would like. And with a bit more conflicting information than I would like – conflicts that make me question the accuracy of stories repeated often before they are recorded and called history.

So much relies on interpretation, doesn’t it?

9 Responses to Travels to the Past – part 3