There is Buried Treasure

I have learned, slowly I will admit, that buried treasure really does exist. Treasure, however, depends upon he who is viewing it or collecting it. What might be my treasure, might well be your -well, not a treasure at all.

To go back in time, to my first examples of buried treasure, I must talk about Shasta girl and a bit of her history. When we adopted her, she was living at the humane society. We were told she had come from a family that had more dogs than food and she and her brother had been brought in because they had become “wanderers”. Apparently in search of food. She was then one year old. After we brought her home, I would find chewy treats we had given her in rather odd places – buried in the corner of a chair or the sofa, occasionally in our bed covers. Buried chewies – her treasures – were not particularly offensive and I confess to discovering her hiding places with laughter. Maybe even some admiration for her innovation and her talent at storing away for a future date.

However. There have been those treasures we have happened upon that were not met with so much laughter. Those treasures that were found with a “yech!” response. Like the gopher that was concealed in our blankets on our bed – the bed I had not yet made that morning. The good news is the gopher was no longer gophering. And the old, ugly bone she had found I have no idea where, also in our bed covers.

More recently, she has buried in the corner of the big recliner, the one purchased for husband who uses it only very rarely and so it has now become Shasta’s chair, what was once a frolicking baby bunny. That discovery was made one evening when I was sitting in my big recliner knitting and Shasta was sitting on the floor next to me, looking at me, then at her chair, then at me, at her chair – until finally I decided I should check to see what her problem was. Yech! We had a discussion, Shasta girl and I, about leaving baby bunnies alone and not bringing some of her treasures into the house. Although I am not certain if she was the one that captured the baby bunny, or if it might have been Lily cat. I have seen Shasta steal some of Lily’s catches from her, so that is a possibility. I’m just not sure if chubby Shasta could run that fast.

Even more recently, just a night or two ago actually, I was ready to crawl into bed where husband was already reading. In preparation, I was puffing my pillow up, putting it into supporting me while I read mode, when something caught my attention underneath that pillow. Oh my! Huge yech! Another baby bunny! Shasta!!!!! We talked about this!!!!

There will be no pictures of the Shasta treasures – that would just be too gruesome. I did get out to my place of peace, my front deck, the other early evening just in time for happy hour. 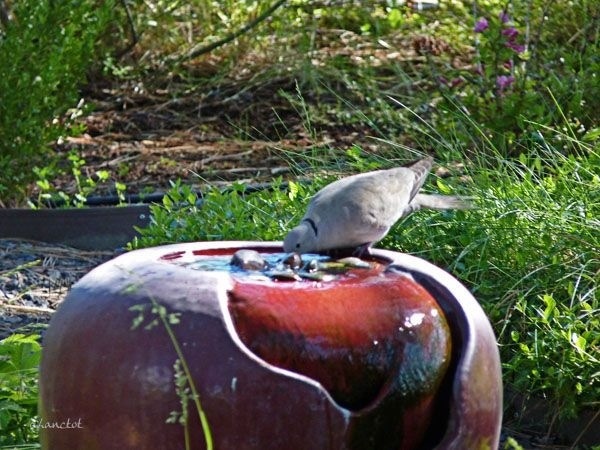 A finch, House, Purple or Cassins – I cannot always tell them apart. 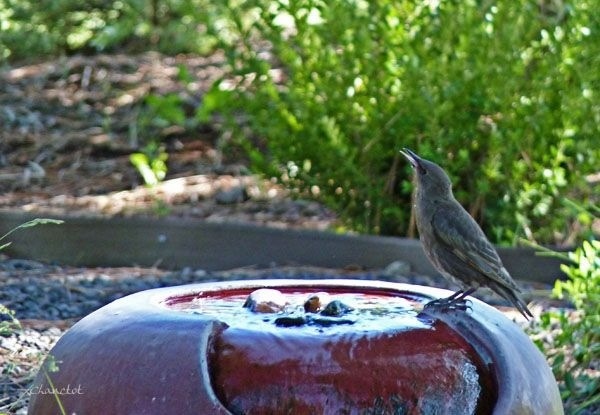 An I’m not sure what it is bird. Maybe a female blackbird?

Now weren’t those so much nicer to look at than Shasta’s buried treasure? I think so.

18 Responses to There is Buried Treasure