A Dutch man has honored his dead cat by turning him into a helicopter. Artist Bart Jansen’s beloved cat Orville died recently after being hit by a car. Jansen had the animal stuffed and attached four vertical propellers to his paws, turning him into an “Orvillecopter” that can be flown around like a remote-controlled aircraft. Jansen insists it’s a respectful way of honoring his cat, who was named after American aviation pioneer Orville Wright. “After a period of mourning,” Jansen said, “he received his propellers posthumously.” (From The Week magazine)

On HGTV’s House Hunters, the woman in one couple did not want trees around her house.Why? Because she didn’t like the “noise” of birds chirping in the morning. He wants his own area, his man cave, his “sanctuary”. Sanctuary from – what? Hmmm, she doesn’t need her own space?

On this one, I think names and parties are interchangeable. “Obama’s attack on Romney’s governorship is “slanted” and “misleading,’’ said Josh Hicks in WashingtonPost.com.” Politicians in a political campaign and information being slanted is surprising?

Wait – packaging for many food products is smaller now – or at least the weight of the contents is smaller. Prices, however, have not gone down.

HGTV again – all these first-time property buyers “must” have stainless steel appliances, granite countertops, open floor plan, hardwood floors (laminated is not good, apparently) and all the space they want in the whole world. Apparently, none of them have heard of compromise and working their way up.

I’m obviously not with the current times. Stuck in the “back in the day” thing, I guess.

So we’ll just move on now to some photos we took on our trip back to Minnesota in 2009. 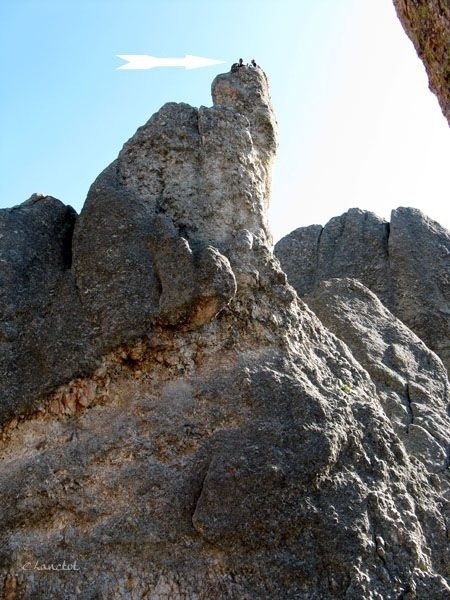 The Needles in the Black Hills of South Dakota. Those two little dots at the top are a rock climbing instructor and his student. Thinking about the idea of rappeling down.

The student gets this far – frequently. But down is a long long ways. We had to leave, but we assume she eventually did get down.

In the Scandinavian Village in Minot, North Dakota, where I lived for awhile as a teenager. Much has changed since then!

A statue of Hans Christian Anderson in the Scandinavian Village. Forgive the blown-out background. Not sure what happened there.

What makes you say what?