Time for an Intervention

Perhaps. Maybe. The possibility exists that I need help. I spent Sunday evening, in my big comfy recliner, knitting in my lap, TV tuned to ABC – the channel hosting the Oscar Award show – AND. Here’s where I think maybe an intervention is necessary. The iPad, with the app for the Oscars on it, tuned to watch the arrivals, some interviews, and then. Backstage.Wow! I could see the winners of the awards after they won! Just like being there!

On what do I blame my regression to my early teen years? Those years of reading Photoplay and other movie magazines, much to my father’s dismay. Of being entranced by the beautiful actresses, who we were all led to believe had perfect lives with perfect husbands and perfect children. In those days, ugly secrets were kept secret. On what do I blame that regression? On what do I blame this possible need for an intervention? The onset of senility? Too much coffee? Not enough coffee?
Maybe not enough chocolate.

Whatever. I am happy Meryl Streep won best actress because I truly think she will one day be a legend. An apparently graceful, gracious and human legend. But. If next year I think about having iPad with Oscar app on one side of me and TV with the showon in front of me, please remind me. That’s. Overdoing. It. Not necessary.

There is other good news, however. I finished the scarf I started Saturday. the one I started with yarn I found on E-Bay that arrived in the mail Saturday. The yarn I found entrancing, probably because it had some fuzz and some glitz. That’s another thing about me – glitz will get me every time! That’s it! My regression is due to my enchantment with glitz! 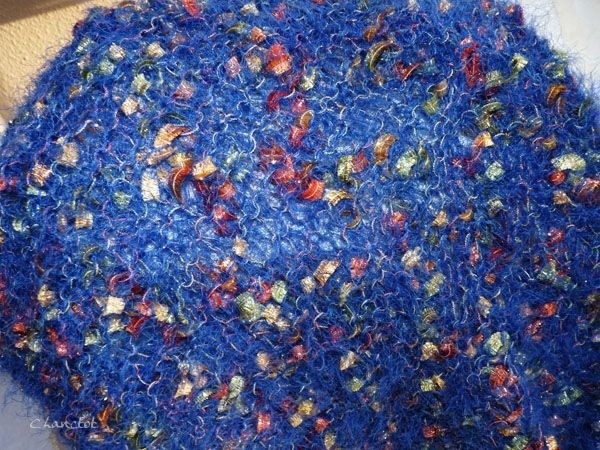 The little colored bits of ribbon are glitzy – despite the fact that I haven’t figured out how to capture shine with my camera.

11 Responses to Time for an Intervention